Pope Francis thanked a child on Wednesday for giving an impromptu “lesson” at his general audience.

Speaking in the Vatican’s Paul VI Hall on Oct. 20, the pope paid tribute to the boy who walked up to him at the beginning of the audience.

“In these days we are talking about the freedom of faith, listening to the Letter to the Galatians,” he said. “But I was reminded of what Jesus was saying about the spontaneity and freedom of children, when this child had the freedom to approach and move as if he were at home… And Jesus tells us: ‘You too, if you do not behave like children, you will not enter the Kingdom of Heaven.’”

“The courage to approach the Lord, to be open to the Lord, not to be afraid of the Lord: I thank this child for the lesson he has given us all. And may the Lord help him in his limitation, in his growth because he has given this testimony that came from his heart. Children do not have an automatic translator from the heart to life: the heart takes the lead.”

The unexpected encounter took place early in the audience as clergy read out Galatians 5:13-14 in various languages, a passage in which the Apostle urges Christians not to abuse their freedom but instead to “become slaves to one another” through love.

As the verses were read in German, the boy, who was wearing a black tracksuit, spectacles, and a face mask, approached Pope Francis, who smiled and clasped his hand.

Msgr. Leonardo Sapienza, the regent of the Prefecture of the Papal Household, who sits to the pope’s right at general audiences, rose and gave his seat to the boy.

The child sat briefly, then stood and pointed at the pope’s zucchetto. He led the priest giving the Portuguese reading over to the pope to show him the white papal skullcap. Eventually, the boy walked back down from the platform proudly wearing his own zucchetto. 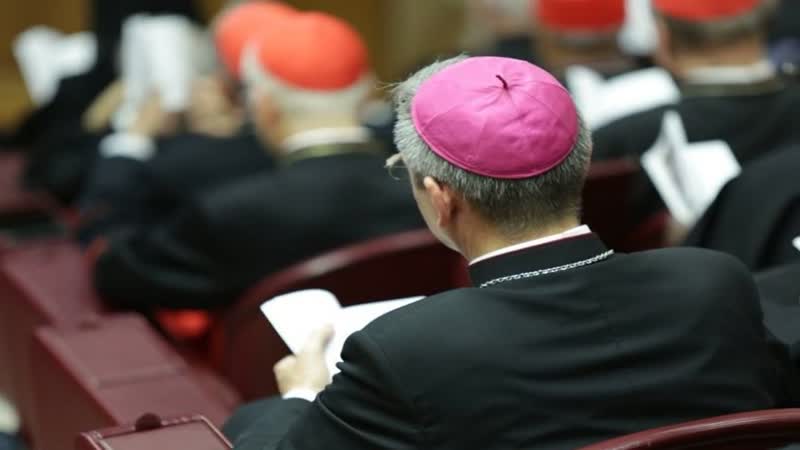 The pope’s live-streamed address, dedicated to the theme “Freedom is realized in love,” was the 12th in his cycle of catechesis on St. Paul’s Epistle to the Galatians.

In his catechesis, Pope Francis explained that in his letter, St. Paul revealed “the great novelty of faith.”

“It is truly a great novelty, because it does not merely renew a few aspects of life, but rather it leads us into that ‘new life’ that we have received with baptism,” he said.

“There the greatest gift, that of being children of God, has been poured out upon us. Reborn in Christ, we have passed from a religiosity made up of precepts — we have moved on from a religiosity made up of precepts — to a living faith, which has its center in communion with God and with our brothers and sisters, that is, in love. We have passed from the slavery of fear and sin to the freedom of God’s children.”

He noted that Paul defined freedom as an opportunity to serve others, rather than to follow selfish impulses.

“Yet again, we find ourselves faced with the paradox of the Gospel: we are freed by serving, not in doing whatever we want. We are free in serving, and freedom comes from there; we find ourselves fully to the extent to which we give ourselves,” he said, describing this insight as “pure Gospel.”

He contrasted Paul’s vision with the idea of liberty as “doing what you want and what you like.”

“This type of freedom, without a goal and without points of reference, would be an empty freedom, a freedom of the circus: it is not good,” he said.

“And indeed, it leaves emptiness within: how often, after following instinct alone, do we realize that we are left with a great emptiness inside and that we have used badly the treasure of our freedom, the beauty of being able to choose true goodness for ourselves and for others?”

He observed that St. Paul always connected freedom with seeking the good of our neighbor, describing this as a “rule for unmasking any type of selfish freedom.”

“On the other hand, freedom inspired by love leads towards the poor, recognizing the face of Christ in their faces.”

Concluding his address, the pope said: “We know … that one of the most widespread modern conceptions of freedom is this: ‘My freedom ends where yours begins.’ But here the relationship is missing! It is an individualistic vision.”

“On the other hand, those who have received the gift of freedom brought about by Jesus cannot think that freedom consists in keeping away from others, as if they were a nuisance; the human being cannot be regarded as cooped up alone, but always part of a community. The social dimension is fundamental for Christians, and it enables them to look to the common good and not to private interest.”

He went on: “Especially in this historic moment, we need to rediscover the communitarian, not individualistic, dimension of freedom. The pandemic has taught us that we need each other, but it is not enough to know this; we need to choose it in a tangible way, to decide on that path, every day.”

“Let us say and believe that others are not an obstacle to my freedom, but rather they are the possibility to fully realize it. Because our freedom is born from God’s love and grows in charity.”

A precis of the pope’s catechesis was then read out in seven languages. After each summary, he greeted members of the respective language group.

Addressing Polish speakers, he noted that Oct. 22 is the feast day of St. John Paul II, who led the Church from 1978 to 2005. He quoted from a homily given by the Polish pope during a 1997 visit to his homeland.

Pope Francis said: “To his protection, I entrust you, your families, and the entire Polish nation. Always remember what he said to you: ‘Who shall separate us from the love of Christ? … Be vigilant, so that nothing may separate you from this love: no false slogan, no mistaken ideology, no yielding to the temptation of compromise with what is not from God or with the quest of self-advantage. Reject everything that destroys and weakens communion with Christ. Be faithful to God’s commandments and to the commitments of your baptism.’ I bless you from my heart!”

In his remarks to English-speaking pilgrims, the pope made special mention of visitors from the United States.

He said: “I greet the English-speaking pilgrims and visitors taking part in today’s audience, especially the groups from the United States of America. Upon all of you, and your families, I invoke the joy and peace of the Lord. May God bless you!”

The audience concluded with the recitation of the Our Father and the Apostolic Blessing.

A “glimpse” at the bridge between the Holy See and China