The Roman Catholic Diocese of Ho in Ghana’s Volta Region on Sunday, December 12, 2021, marked its 2021 End-of-year Grotto pilgrimage with hundreds of faithful in attendance.

Various groups and societies in the Church participated in the one-day pilgrimage held at the Our Lady of Lourdes Grotto, Kpando Agbenoxoe in their colourful costumes and attires.

The day was celebrated as the Solemnity of Immaculate Conception of the Blessed Virgin Mary,(observed every December 8), instead of the third Sunday of Advent.

Most Rev Emmanuel Kofi Fianu, SVD, Bishop of the Ho, prior to the mass, led a prayer to commit all faithful to the intercession of the blessed virgin Mary. 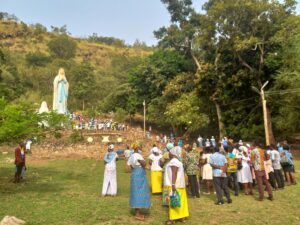 In his homily, the Bishop said God through his love for humankind was willing to save them from the destruction of sin, made salvation possible.

He noted that humanity came into sin from the beginning of time when Adam and Eve listened to the lies from satan instead of obeying God and his commandments.

The Bishop said through disobedience, sin entered the world and corrupted human nature and existence from generation to generation.

However, God through his love for humankind was willing to save them from the destruction of sin, made salvation possible, he added.

Bishop Fianu called on the faithful to resolve to commit themselves anew to God in the footsteps of Blessed Virgin Mary, conceived without sin. 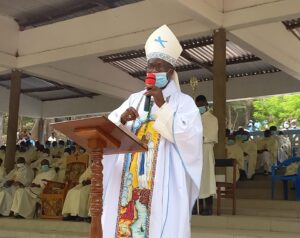 He urged the faithful to do their best to remain faithful to God and keep their trust and faith in him, resist and reject the temptation of sins and live their lives to the best of the will of God.

The celebration, which also climaxes the end of the Year of St. Joseph launched by Pope Francis in 2020, also saw the  Diocese honouring some of its benefactors.

A total of 91 individuals-including clergy and religious, church groups and corporate institutions were presented with citations for their tremendous support to the Diocese during the first five years of Bishop Fianu’s episcopacy (2015-2020).

The Bishop commended the honoured for using their strength, might and resources to support Episcopal activities in areas of financial and services rendered the Diocese under the five-year period. 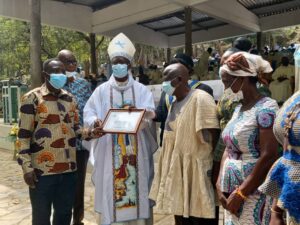 He said the Diocese was also grateful to all whose support had brought the Diocese far within the period.

Bishop Fianu further urged the faithful to continue to render their support for the Diocese to enable it met the purpose as assigned by the Mother Church to God’s glory.

The pilgrimage was crowned with fundraising towards the redevelopment of the Grotto.

Francisco, in the operating room for a problem in the intestine

RE- DEDICATION THANKSGIVING MASS OF MARTYRS OF UGANDA PARISH-MAMPROBI-ACCRA

RE- DEDICATION THANKSGIVING MASS OF MARTYRS OF UGA...

RE- DEDICATION AND AND CONSECRATION OF MARTYRS OF UGANDA PARISH-MAMPROBI

RE- DEDICATION AND AND CONSECRATION OF MARTYRS OF ...

RE- DEDICATION THANKSGIVING MASS OF MARTYRS OF UGANDA PARISH-MAMPROBI

RE- DEDICATION THANKSGIVING MASS OF MARTYRS OF UGA...

As we pray the Divine Mercy Chaplet, we bring fort...