The government of Ghana has condemned the attacks by the Houthi militia that targeted civilian areas including the Abu Dhabi International Airport and other sites in Saudi Arabia, killing three people and injuring others.

The Ghanaians government in a statement said the attacks are a violation of international law and threaten efforts at restoring peace and security to the region.

The Ghanaian government has urged all sides to avoid any actions that would escalate violence and increase tension in the region.

Ghana has expressed its deepest condolences to the government and people of UAE, the Kingdom of Saudi Arabia and the families of the victims. 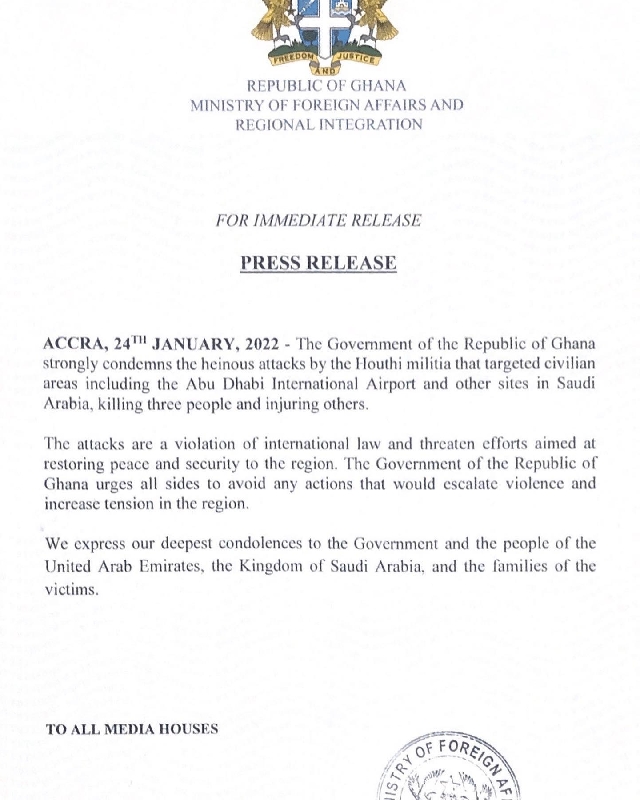 Yemen’s Iran-aligned Houthi group last week attacked the United Arab Emirates with missiles and drones, setting off explosions in fuel trucks that killed three people and caused a fire near the airport of Abu Dhabi.

The Houthis have frequently launched cross-border missile and drone attacks on Saudi Arabia.

Houthis, is an Islamist political and armed movement that emerged from Saada in north Yemen in the 1990s.

The movement’s expressed goals include combating economic underdevelopment and political marginalization in Yemen while seeking greater autonomy for Houthi-majority regions of the country. They also claim to support a more democratic non-sectarian republic in Yemen

This message is only visible to admins:
Problem displaying Facebook posts.